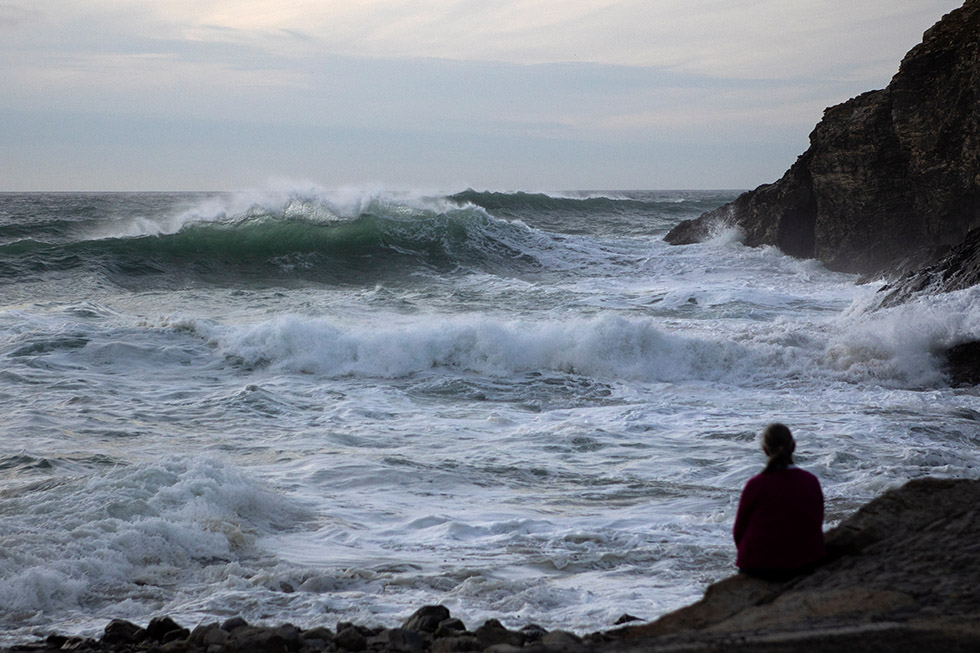 Storms can be devastating and destructive but also beautiful and breathtaking. So what do storms mean to you? People experience storms in many different ways. Psychologists believe a storm can evoke a sense of calm, a lowering of anxiety. Not the thrill-seeking anticipation that often applies to storm chasers.

Whatever your reasons for enjoying a storm, nowhere is more majestic than along the North Cornish coastline. Cornwall is situated in the somewhat turbulent Atlantic Ocean, providing it with a coastline beloved by surfers for the constant crash of waves and storm chasers for the intensity of a Cornish storm.

Well-known for its super coves and beaches in summer. Winter and autumn bring the sometimes awe-inspiring storms. Artists love to depict the sea in its quiet and turbulent presentations. Many artists head over to Cornwall to capture the spirit and colours of a storm.

Vellandreath cottages are open all year round. The cottages are placed in an excellent location for experiencing storm watching in Sennen Bay. Plus near enough for refuelling in one of the local cosy pubs. This blog explores the history of storm watching. Why we enjoy them so much, and the best spots to go to enjoy an Atlantic storm in all its glory.

Storms - A Tonic For The Soul

For many walking in the rain, the atmosphere before a storm and the invigorating aftermath of a storm are enjoyable. Psychologists suggest this is because our brains crave sensory input, and storms produce ‘pink noise’. In tests, it was found that ‘pink noise’ engages the subconscious by the variables in frequency. Moreover, this noise has a positive effect on sleep and memory.

Rain, wind and other storm noises produce this sound, which for many is calming and lowers anxiety. These psychological effects have fostered many scientific enquiries. But other than the pink noise, the research remains speculative.

However, when you enjoy feeling the effect of a storm, you may be experiencing ‘pink noise’. It has also been suggested that a storm shows us that there are forces in the world bigger than us and our troubles, having a cathartic effect on our worries.

Of course, storms can create anxiety, especially in the families of Cornish beamer fishermen and other deep-sea fishermen. For others, the noise can be a trigger for an unpleasant memory, for example, the crash of thunder sounding like London in the Blitz.

In the 18th century, goods from a sunken ship arriving on the shore were considered common property in the laws at that time. Meaning those who collected any cargo bounty owned then, tax-free. A foundering ship was a call-out to the villages to head to the beaches with pickaxes and hatchets to dismember the ship to obtain the goods it was carrying.

Unfortunately, the law deemed it illegal to collect these goods if anyone was left alive following the foundering of a ship. This was unfortunate for the crew, as during these hard times, this law was a death sentence for any survivors. Legends suggest that these ill-fated ships were lured into what they thought was safe harbour by devious means. For instance, tying lights onto the tails of horses. However, it was far more likely that beacons were set on the shores causing ships to founder on nearby rocks.

You only have to stand and absorb the atmosphere of the sea. Watch the waves breaking along any part of the North Cornish coast on a stormy day to imagine the danger and terror that faced those poor sailors.

No Such Thing As Bad Weather, Just The Wrong Clothing

When storm-watching in Cornwall, it is essential that you wear the right gear. Waterproofs and warm gear are essential. Another requirement is your safety when storm watching. Take some time, research, and undertake a risk assessment before heading out on your adventures. Talk to the locals about the safest spots and check the Met Office for updated weather warnings. Finally, keep a reasonable distance from the ocean.

You can enjoy a storm in safety by following these instructions and maintaining common sense. While pets are welcome at Vellandreath Cottages, it is advisable not to take them storm-watching with you. While you might find it exhilarating, most of our pets don’t. If caught walking with your pets, quickly put them on a leash and move away from coastal paths.

If staying at Vellandreath Cottages during the Autumn and Winter months. You will be able to experience the theatre of Cornish stormy weather at several places, including these three.

Just a stone’s throw away from the Vellandreath Cottages, you need not bother with wet weather gear watching storms from the Sennen Cove car park. But for those feeling adventurous, you could walk from the car park eastwards to Maen Hill Castle. Enjoy the drama of the storm, then take a warming drink at the Sennen Cove Cafe.

Just a short drive from Vellandreath Cottages is the small town of Marazion. Here the storms come in from the south or south-east direction. Once again, parking in the beach car park will provide you with the perfect spot to absorb the storm’s frenetic energy. Get a takeaway cappuccino to stay warm from Jordan’s Cafe in the car park.

The Marazion beach car park provides the perfect spot to experience storms that come from a southerly or south-easterly direction. If you are all dressed for wet weather, you can take a bracing walk along the cycle path leading to Penzance for a closer encounter with the stormy weather.

A little further to drive, around 30 mins by car, this is another spectacular point from which to view storms. From Hayle, go toward the Godrevy headland, opposite the Godrevy lighthouse. From here, you can view some spectacular weather. For those slightly more adventurous, head along the coastal path to higher ground. You can even walk to Mutton Cove and see the seals before returning to your car. Before leaving Godrevy, treat yourself to a superb lunch at the 5* Godrevy Cafe. Then, returning to Sennen Cove, maybe plan your day to stop in the picturesque town of St Ives.

We have some great late availability offers for cottages at Vellandreath Cornish Cottages: 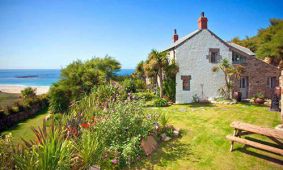